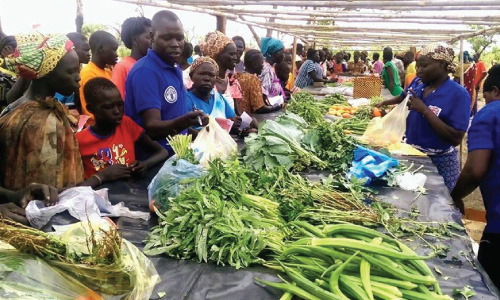 Nimule – March 2015 A nutrition supplement voucher scheme worth over a million South Sudanese pounds has been launched for the internally displaced people (IDPs) in Melijo and the Baptist church in Nimule.

The project dubbed as ‘linking producers to the people for proper nutrition’ is a partnership between Health Link South Sudan (HLSS) and the Food and Agricultural Organisation (FAO) with support from UKaid.

According to HLSS’ camp manager Jimmy Moini, the beneficiaries of the project get vouchers from field assistants and use them to buy the food items on three markets days; Monday, Wednesday and Fridays, where each household gets food worth SSP99 per market day for three months from March.

“This project is worth SSP1.5million. We are giving the IDPs fish, milk and vegetables to supplement what WFP gives them,” Opiyo said.

“We have trained the IDPs/host community on how to maximize fishing in the catchment areas; we gave out fishing gears and other farming tools to 200 households.

“We have trained women on how to preserve fish and also trained 16 community animal health workers from the host and IDP communities to vaccinate and treat animals with the aim of improving dairy products of the host community.”

The project has been hailed by the recipients including their head chief Abraham Thon. “This project is very good. The fish, milk and vegetables give us the other food supplements we have been missing. I just wish HLSS and FAO will continue providing these food items even after the three initial months,” he said.

“This project is really good for me as a young mother. When you feed well on milk, greens and fish, you produce enough breast milk for the baby,” Deborah Aweil, a young mother at the camp added.

“Due to the dry season, the local milk producers don’t have enough milk to supply but when the rains begin, there will be enough for the cows to eat and enough water to drink, hence more milk,” he explained.

“We have also given out seeds so when the rainy season starts, IDPs and the host community will be able to produce and sell their vegetables from within. This project aims at building durable solutions and promoting peaceful co-existence between the host community and the IDPs. ”

These IDPs are mainly from Jonglei and have allegedly lost all their belongings including cattle to the conflict which started on the 15 December 2013.

More than two million people across the country according to relief agencies have been displaced by the conflict with Melijo and Baptist Church camps hosting 5,414 of them.